Wednesday, March 31st - Official Determination of Cause of Fire

The official statement from Fire Marshal Tony Russo for the cause of the fire at the Bayfront Towers is: Accidental, Undetermined.

Any other questions should be directed to the Fire Marshal’s office. Fire Marshal Russo can be reached at tony.russo@nassaubay.com. 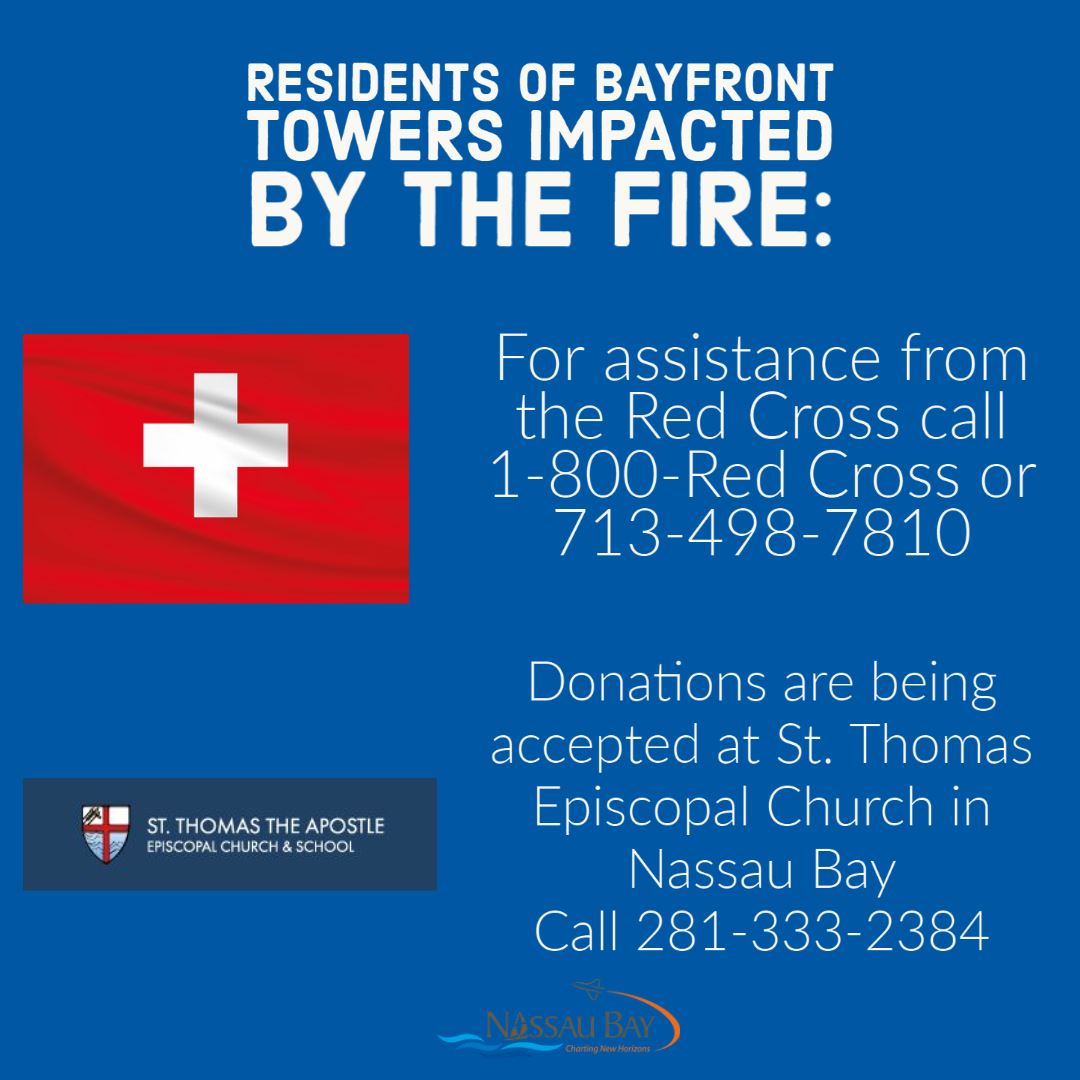 For residents of the Bayfront Towers impacted by the fire that took place yesterday: Please contact the Red Cross for assistance at 713-498-7810. They will be able to assist you while you are displaced from your home, as well as provide other services. Donations are being accepted and coordinated by St. Thomas the Apostle Episcopal Church of Nassau Bay. If you wish to donate, please call 281-333-2384.

[7:30PM] Update from the City of Nassau Bay regarding displaced residents: The American Red Cross will be setting up an intake shelter for residents displaced from the fire that occurred earlier today at the Bayfront Towers. Residents in need of assistance should go to St. Thomas the Apostle Episcopal Church, located at 18300 Upper Bay Rd, Nassau Bay, TX 77058. Residents of the Bayfront Towers should expect to be contacted by the Homeowners' Association (HOA) when it is safe to return. Residents may also check the City's website and social media over the next three days for status updates.

The City has reached out to the Red Cross and displaced residents in need will be assisted by them. Still reporting no injuries.

[5:30PM] 14 Fire Departments, 2 Marine Units are assisting the City of Nassau Bay in response to the major fire at the Bayfront Towers. Approximately 35% of the building is damaged. Precinct 8 is assisting with traffic control around the area. No injuries reported.

[4:15 PM] At approximately 3:50pm, Nassau Bay Volunteer Fire Department Fire Chief Tom George made notification of a major structure fire at the Bayfront Towers on Lakeside Lane. Nassau Bay’s Volunteer Fire Department, EMS, Police, and Fire Marshal are on the scene. It is known that the fourth floor of the building has collapsed. Approximately 35% of the building has sustained damage. There are 74 condo units at the Bayfront Towers. Thus far, there are no known injuries.